A former permanent secretary, Bureau of Protocol and Ceremonials in Ogun State and a pastor of the Redeemed Christian Church of God, Dolapo Odulana, is alleged to be enmeshed in paternity mess.

According to a video made available to National WAVES, a lady, known as Adesanya Adenike Fausat accused him of putting her in the family way and denying the paternity of the child.

Adenike who spoke in Yoruba language alleged that Odulana impregnated her while she was on internship with the Ministry of Agriculture while their relationship lasted.

She further explained that Mr. Odulana instructed her to terminate the pregnancy but she opted to keep it. She said he denied the pregnancy on the grounds that he was sterile, legally married and a pastor whose image should not be tainted.

Adenike  said six years after she gave birth to the child, she tried to  contact Odulana on phone on the need to play his role as the father of the child but all her efforts met a brick wall as Odulana allegedly blocked her lines and that of her family members.

Adenike said that in the last six years she had taken care of the child as a single mother and appealed to Odulana to take up his responsibilities.

Adenike who was interviewed by veteran broadcaster and activist, Oriyomi Hamzat, implored him to ensure her child secures fatherly rights from Odulana.

Those close to Mr. Odulana said he confided in them that Adenike was out to blackmail him, but Oriyomi appealed to Odulana to make himself available for a DNA test. 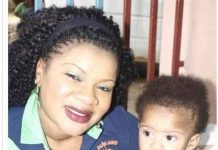 My Husband, Pastor Paul Ekwe, Is A Womaniser-Wife