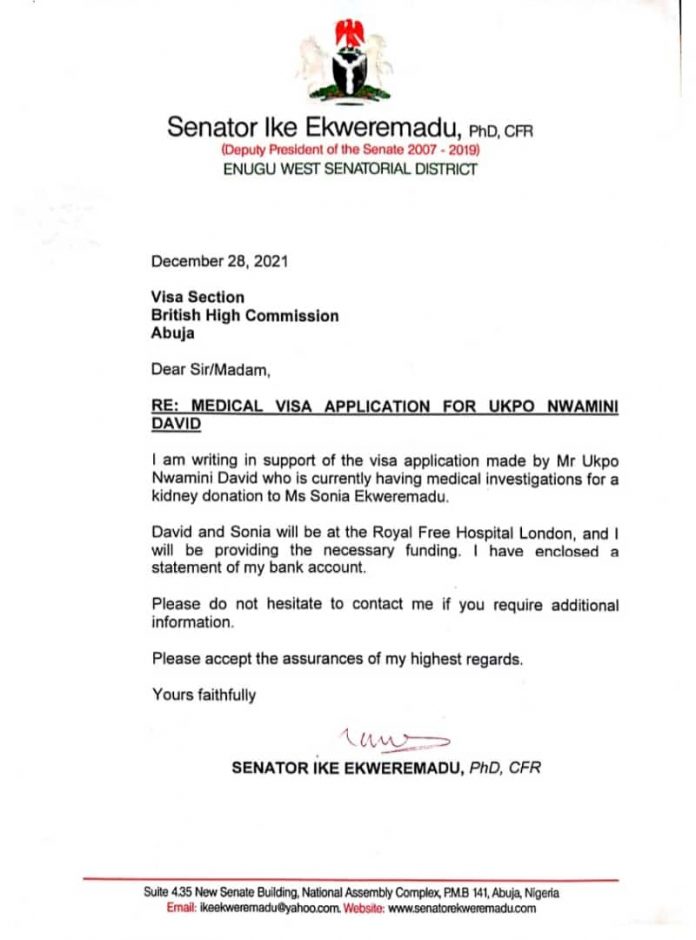 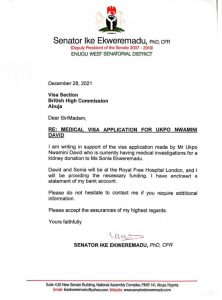 Ekweremadu’s letter to the UK Embassy

A letter made available to NATIONAL WAVES revealed that Nigeria’s former Deputy Senate President, Ike Ekweremadu procured a visa for boy to donate kidney for his daughter.

The UK Metropolitan Police had announced on Thursday, that Senator Ekweremadu and his wife, Beatrice, were arrested and charged in the country for alleged “organs trafficking.”

The UK police had said the lawmaker and his wife were arrested following an investigation by the Metropolitan Police’s Specialist Crime team.

“The investigation was launched after detectives were alerted to potential offences under modern slavery legislation in May 2022. A child has been safeguarded and we are working closely with partners on continued support. As criminal proceedings are now underway we will not be providing further details”, read the UK police statement.
But hours after reports of their arrest, details have emerged that the serving Nigerian Senator, officially wrote to the British High Commission, Abuja, on December 28, 2021, in support of “the visa application made by Mr Ukpo Nwamini David, who is currently having medical investigations for a kidney donation to Ms Sonia Ekweremadu.”
Sonia. Investigators revealed that one of the daughters of Ekweremadu, who graduated from a UK university in 2019 needed a kidney transplant
In the letter, the Senator told the British Embassy that “David and Sonia will be at the Royal Free Hospital London, and I will be providing the necessary funding, I have enclosed a statement of my bank account.”

The letter reads: “I am writing in support of the visa application made by Mr Ukpo Nwamini David, who is currently having medical investigations for a kidney donation to Ms Sonia Ekweremadu.
“David and Sonia will be at the Royal Free Hospital London, and I will be providing the necessary funding. I have enclosed a statement of my bank account.”

Meanwhile, Ekweremadu along with his wife, Beatrice, were denied bail on Thursday afternoon by the Uxbridge Magistrate court
The couple were arraigned by the Metropolitan police for an attempted organ harvesting and child trafficking.
They are being tried under the United Kingdom’s Modern Slavery Act 2015 (MSA 2015). Recall that MSA 2015 frowns at human trafficking, under which organ harvesting falls, and is punishable with a maximum sentence of life imprisonment upon conviction.
The act partly reads, “Under s 2, an individual commits an offence if they arrange or facilitate the travel of another with a view to that person being exploited. It is irrelevant whether that person consents to the travel, or whether they are a child or an adult.
“Under s 3 of MSA 2015, exploitation includes: slavery, servitude and forced or compulsory labour; sexual exploitation (which involves the commission of an offence under s 1(1)(a) of the Protection of Children’s Act 1978 (indecent photographs of children), or Pt 1 of SOA 2003 (eg, rape or sexual assault); removal of organs, where a person is encouraged required or expected to do anything which involves the commission of an offence under ss 32 or 33 of the Human Tissue Act 2004 (prohibition of commercial dealings in organs and restrictions on the use of live donors); securing services etc by force, threats or deception; securing services etc from children and vulnerable persons (eg, physically or mentally ill or disabled).”

PDP condemns detention of Senator Ademola Adeleke by the police