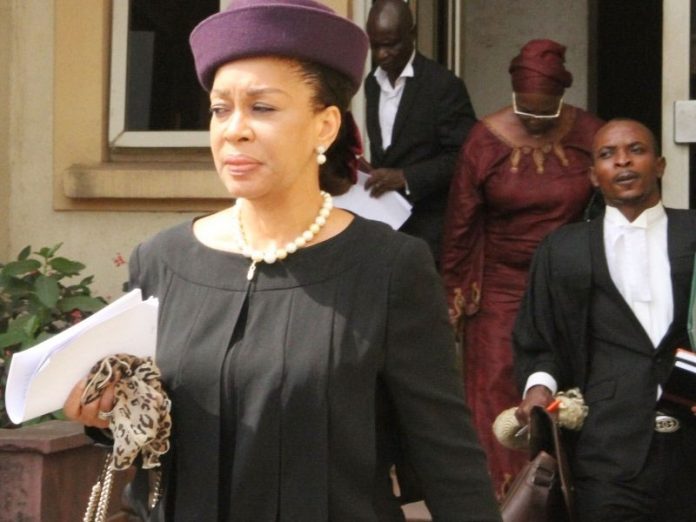 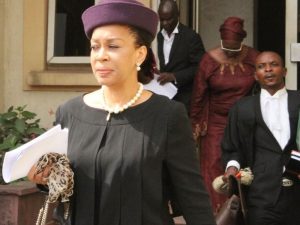 Justice Allagoa discharged the embattled judge of the allegations while granting application to quash and dismiss the charges, filed and argued by Olawale Akoni (SAN) counsel to the Justice Ofili-Ajumogobia.

In urging the court to dismiss the money laundering charge Akoni (SAN) told the court that the application is sequel to an order of Justice Binta M. Nyako of Abuja Division of the Federal High Court, which he said had quashed all the recommendations made by the National Judicial Council (NJC).

Akoni (SAN) also told the court that by virtue of judgment of Justice B.M Nyako, delivered on November 28, 2019, in Suit No. FHC/ABJ/CS/638/2018, between Hon, Justice Rita Ngozi Ofili Ajumogobia and National Judicial Council. The judge had quashed NJC’s report and recommendation. And that Justice Ofili-Ajumogobia has been reinstated.

The EFCC in a counter-affidavit deposed to by John Michael Idoko, attached to the Chairman’s Monitoring Unit, that he was informed by S. I. Suleiman Esq., counsel handling this matter that the applicant, Justice Ofili-Ajumogobia had filed an application dated March 23, 2021, seeking this Honourable Court to strike out or quash the charge against the Applicant for being incompetent and lack of jurisdiction to try same by this Honourable Court.

The deponent stated that the Court has the requisite to hear and determine the allegation of Money laundering levelled against Defendant. And that by a petition dated December 28, 2017, to the National Judicial Council (NJC), the Commission accused Justice Ofili-Ajumogobia of various acts constituting misconduct under Code of Conduct of Judicial Officers

The deponent averred that on September 18, 2018, the NJC’s investigating Committee, upon the conclusion of the hearing of the petition submitted its report to the Chairman of the Council recommending appropriate sanction to be imposed on Justice Ofili-Ajumogobia by the Council. Adding that on November 7, 2018, the President and Commander-in-Chief of the Armed Forces exercised his constitutional power pursuant to section 292 (1) (b) of the 1999 Constitution of the Federal Republic of Nigeria (as amended) and dismissed the Applicant as a judge of the Federal High Court.

The deponent stated that upon the exercise of the aforementioned constitutional power, the President equally transmitted a letter to the National Judicial Council informing the Council of his decision. And that Justice Ofili-Ajumogobia has never been acquitted of the offences contained in the instant charge in any Court or tribunal of competent jurisdiction within and outside the shores of Nigeria.

He also stated that NJC’s findings and the recommendation to the President and the President’s letter to the Council are all on the record before this Honourable Court.

He stated that his Commission has seen Defendant/Applicant’s exhibit wherein His Lordship Honourable Justice B. F, M. Nyako on November 28, 2019, in Suit No, FHC/ABJ/CS/638/2018 between Hon, Justice Rita Ngozi Ofili Ajumogobia and National Judicial Council held thus: “consequent on the above finding, I hereby Set aside all that the Respondent did in respect of this matter premised on the same issues as in the subject matter of the trial before the High Court Of Lagos State,”

Ruling on the arguments canvassed by the parties, Justice Allagoa held that: “I have look at the application. I have also looked into the counter-affidavit of the prosecution, it does not indeed controvert the application.

“I am satisfied that the application has merit, the prayers sought for are hereby granted as prayed”.

The free judge, Justice Ofili-Ajumogobia was first arraigned on April 18, 2019, before Justice Rilwan Aikawa, alongside, Obla on a 18-count charge of unlawful enrichment, illegal concealment, corruption, forgery and giving false information to an official of the EFCC.

The anti-graft agency alleged that the two defendants allegedly conspired to indirectly conceal the sum of N5, 000,000.00 in the Diamond Bank account of Nigel Et Colive Ltd, which sum they reasonably ought to have known forms part of proceeds of an unlawful act to wit: unlawful enrichment.

They had both pleaded not guilty to the charge.