Home News KUKAH, BUHARI IN WAR OF WORDS OVER INSECURITY IN NIGERIA 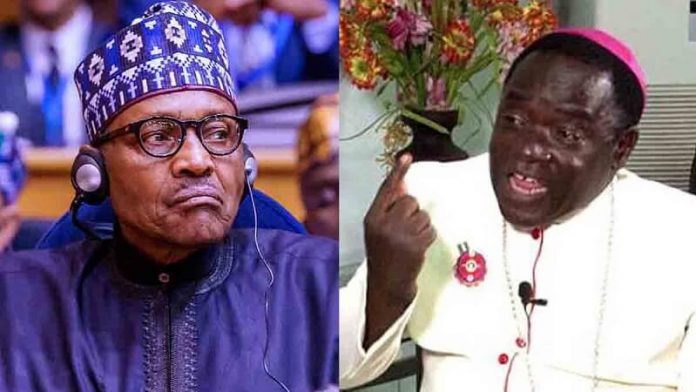 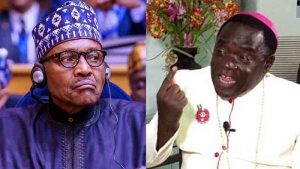 For the umpteenth time, the  Catholic Bishop of Sokoto Diocese, Matthew Kukah, has slammed President Muhammadu Buhari. over insecurity in Nigeria. The cleric said the greatest tragedy of Buhari administration is the death of empathy.

Kukah, in his Easter message stated that the Buhari’s government clay-footed fight against corruption had not moved the needle of transparency forward.

The clergyman said Nigeria, being the poverty capital of the world came with its rewards such as banditry, violence, death, sorrow, blood, poverty, misery, and tears.

He added that the nation’s cup of sorrow is permanently full; hence the exponential rise in the frustration curve across the country.

“Sadly, human life is haemorrhaging so badly in Nigeria, but the greatest tragedy is the death of empathy from those in power.

“Mysteriously, the government is investing billions of naira in rehabilitating so-called Boko Haram repentant members and their other partners in crime in the belief that they want to turn a new leaf,” he lamented.

According to Kukah, these criminals have waged war against their country, murdered thousands of citizens, destroyed infrastructure and rendered entire families permanently displaced and dislocated.

He asked: “Why should rehabilitating the perpetrators be more important than bringing succour to the victims? When kidnapped or killed, victims and their families are left to their wits. They cry alone, bury their loved ones alone.

“And our government expects us to be patriotic? The victims of violence need empathy, which the dictionary defines as the ability to understand and share the feelings of the other.”

Kukah decried that a critical deficit of empathy on the side of the government made healing almost impossible for the victims, saying that the nation has not heard anything about a rehabilitation programme for the thousands of schoolchildren who had been victims of abduction.

“We seem to assume that their return to their schools is sufficient. Left unaddressed, the traumatic effect of their horrors will haunt them for a long time. Tomorrow’s parents, military generals, top security men and women, governors, senators, and ministers will come from today’s pool of traumatised children,” he added.

Kukah noted  that the security quandary was the greatest indictment of this government, stressing that when governments faced legitimacy crises, they fell back on serving the sour broth of propaganda, half-truths, and outright lies.

He  said they would manufacture consent by creating imaginary enemies, setting citizens against one another by deploying religion, ethnicity, region, and other platforms while appealing to the base emotions of patriotism

In a swift reaction, the  Presidency, on Sunday, took a swipe at Bishop Kukah over his 2021 Easter homily, saying it is an ungodly attempt to politicise the nation’s security.

.A statement by the President’s Senior Special Assistant on Media and Publicity, Malam Garba Shehu stated that Kukah, the Catholic Archbishop of Sokoto Diocese, had said things that were inexplicable in his Easter message.

According to the presidential aide, it is wrong for Kukah to have stated that ”the Boko Haram terrorism is worse than it was in 2015.”

Shehu expressed the belief that Kukah did not speak like a man of God.

He, therefore, urged well-meaning citizens to continue to support the ongoing efforts by the Buhari administration to secure the country and move it forward.

The statement read in part: “But if you profess to being a man of God, as Father Mathew Hassan Kukah does, ideology should not stand in the way of facts and fairness.

“Father Kukah has said some things that are inexplicable in his Easter message.

“But, in saying that the Boko Haram terrorism is worse than it was in 2015, he did not speak like a man of God.

“Kukah should go to Borno or Adamawa to ask the citizens there the difference between 2014 and 2021, Shehu said.

On the hijab controversy in Kwara, which Kukah also touched on, Shehu pointed out that it was “a state matter which the courts of the land had adjudicated on.”

“They are matters that have appeared in several states as far back as the Obasanjo administration. In all of that, when and where did the name of President Buhari feature?

“He (Kukah) is playing partisan politics by dragging the President (Buhari) into it.

“An administration that has created a whole ministry, for the first time in the country’s history, appropriating enormous resources to it, to deal with issues of internally displaced persons cannot, in all rightfulness be accused of not caring for them.

“Some of the comments are no more than a sample of the unrestrained rhetoric Fr. Kukah trades in, which he often does in the guise of a homily,’’ Shehu said

We have sealed 7 branches of GTBank to recover debt –...