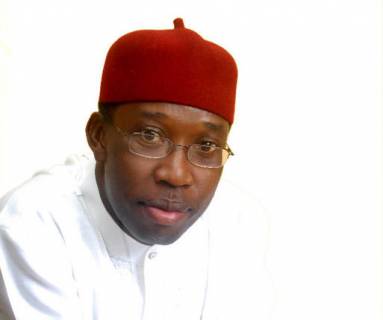 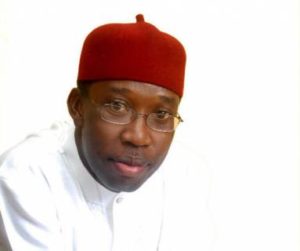 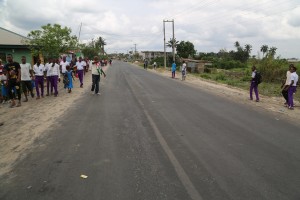 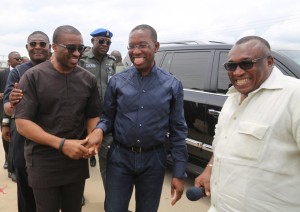 It is nearly eight months since Senator (Dr.) Ifeanyi  Okowa took over the mantle of leadership in  Delta State, after winning the April 2015 governorship election.  The medical doctor turned politician who is popularly called “Ekwueme” was a member representing Delta North Senatorial district in the National Assembly.
Initial Moves
Since assumption of office ,  Governor Okowa  has shown that he has adequate grasp  of the  problems confronting  the  people of  Delta State among which are paucity of funds,  state indebtedness , infrastructural  collapse ,  inadequate  human capital development among others,  amidst high expectations  and trust that  the people placed  on him,  and the urgent  need  to improve on the standard of living  of his people.
Okowa , a seasoned administrator, is not unmindful of the task  and the impediments ahead, hence the need to take  pragmatic steps to get around these challenges. In hitting the ground running, Okowa instituted Economic Management Team to formulate robust economic policies that will address the Socio-economic challenges confronting the state in line with his  campaign promises;  to bring prosperity to all Deltans as encapsulated in the SMART agenda.
In driving the initial process of governance, Okowa within one week of his inauguration  sponsored  three  Executive  Bills  in the State House of Assembly; Delta State Contributory  Health Commission  Bill,2015, Technical  and Vocational  Education  Board  Bill ,2015, and Asaba Capital Development Agency  Bill, 2015. These agencies have since currently operational. Okowa also gave strength  to the Delta State Oil Producing  Area  Development Agency (DESOPADEC) law  by restructuring  the management team.
Breaking New Grounds;
Job Creation
The result of Governor Okowa’s economic policy recently came to fore when last week, 6,000 youths graduated from a government –sponsored six months intensive skill acquisition and entrepreneurial programme at the Songhai Delta, Amukpe , Delta State.
Governor Okowa had on August 26, 2015 inaugurated the job and wealth creation scheme with a mandate to create employment for 60,000 persons over the next four years,
The wealth and job creation programme  available to youths are; the Youth Agricultural and Entrepreneurs Programme (YEGEP), Skill Training and Entrepreneurship Programme (STEP), Production and Processing Support Programme (PPSP) and Micro- Credit.  These schemes are designed to teach youths skills, tackle unemployment and raise entrepreneurs in the state.
Youth Empowerment

Shortly after the graduation, the state government empowered the graduands  with starter packs. The beneficiaries were trained on event management and decoration, hair dressing, barbing, tiling, POP and interlocking/landscape, in Songhai-Delta, Amukpe, to tackle youth unemployment and combat poverty through entrepreneurship schemes as encapsulated in the Governor’s SMART agenda.
The entrepreneurs were dispersed with starter packs, including take off grants and a monthly stipend to sustain their businesses for three months. The Governor warned them against the temptation of auctioning the starter-packs.
The Governor, accompanied by top government officials during the passing out ceremony said although cynicism greeted the scheme at the initial stage, the passing-out ceremony was undeniable proof that our critics were wrong.
The governor said, ‘A little over six months ago when we commenced this journey, there were not a few skeptics who thought it was another one of those government empowerment programmes that would eventually be scuttled by political intrigue, god-fatherism, corruption and bureaucratic red tape. Even some of the participants here were not left out in this widespread cynicism. Their initial interest was to see how they could, as was the norm in the past, get their share of the ‘national cake’ before the programme is abandoned.”
Okowa declared the programme a success, adding that only five persons dropped out of the course.
His words, “I am informed that only five persons did not complete the course. Out of the five, one got a paid employment while another person unfortunately passed on. So, technically, only three persons dropped out from a set of 776 trainees. That translates to 99.2% performance, an unprecedented record with a scheme like this.”
According to him, the high retention rate is the result of the rigorous screening and selection process of the job and wealth creation scheme.
He urged the trainees to put into practice the principles learnt from the training, stressing that success in business requires focus, diligence, careful planning, excellent service and prudent management of resources.
Also speaking during the distribution of the working tools, Prof. Eric Eboh, the  State Chief Job Creation Officer, SCJCO,  in Asaba, revealed that a number of measures have been put in place to enable the artisans succeed.

He said gone were the days when such opportunities were abused by recipients of government gesture as he said the artisans were established to become employers of labour and change the economic landscape of Delta State.

According to him, monitoring and mentoring mechanisms have been put in place to ensure sustainability of the programe and its quality compliance by the recipients.
He said, “The mentoring is in collaboration with the Micro Credit and Poverty Alleviation Programme of the state government. We shall then from time to time visit them, know how they cope with the business, advice where necessary in order to avoid the pitfalls of the past.”

The Governor added, “oil revenue can no longer satisfy our needs, it is a statement of fact and not paying tax by anybody is a criminal offense, it is fraudulent; tax is not to inflict pains on the very poor but to ensure that everybody is taxed based on the amount of money he generates.”
Industrial Development
A significant step has been made in the area of industrial development when the governor accompanied President Muhammadu  Buhari  on a visit to India  to discuss on the potentialities of revamping the Delta Steel Company, Aladjah .  Just last week, Governor Okowa received a team of United Nation Industrial Organization (UNIDO)  on areas of partnership in the area of entrepreneurship and skill acquisition in line with his administration’s job and wealth creation programme.
Okowa told the team lead by Mr. Phillippe Scholtes, Managing Director, Programmes Development and Technical Co-operation Division, UNIDO Headquarters, that the state government was ready to partner with UNIDO in the area of agro-business, especially aqua-culture, palm and cassava production and processing.
‘’We will co-operate with you beyond what we are doing now; we hope to partner with you in the area of agriculture especially, in the production and processing of cassava, palm and aqua-culture where we have comparative advantages,” he said, adding, “we believe that we must find ways of re-orientating our youths to make them embrace agriculture and skill acquisition as means of creating jobs and wealth.’’
He reiterated, ‘’As Nigeria’s population grows, there is the need to make sure that the people acquire skills that will make them job and wealth creators.’’
If these achievements can be recorded in just eight months despite the dwindling federal allocation, it follows that there are better days ahead of Deltans because what Okowa has achieved with meager resources in eight months clearly signals hope. Simply put, if he gets more revenue, he will surely deliver more dividends in pursuance of his prosperity for all Deltans’ agenda.
•    Prince Victor Efeizomor is Print  Media Assistant to Governor Ifeanyi Okowa. 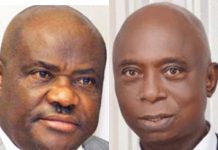 Ned Nwoko Slams Wike, Says ‘You Will Go To Jail For Your Atrocities’ 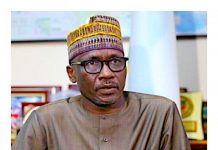 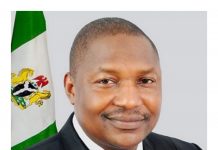 HOPE UZODINMA IS ON A DIVINE MISSION